BAR COUNCIL OF INDIA UNDER THE ADVOCATES ACT, 1961 READ WITH BCI RULES:

The statutory powers and functions of the BCI as conferred by means of the Advocates Act, 1961 as well as the BCI Rules are two fold;

Secondly, to prescribe a uniform qualification for the admission of persons to be advocates and to further regulate the entry and over all conduct of Advocates in the profession by laying down standards of professional conduct and etiquettes for advocates.

Section 7 of Advocates Act provides for the functions of the Bar Council of India, subsection 1(c) whereof provides for laying down standards of professional conduct and etiquette for advocates and sub-section 1(d) mandates to safeguard the rights, privileges and interests of advocates.

Section 7(1)(h) of the Advocates Act, 1961 provides for promotion of legal education and to lay down the standards of such education. 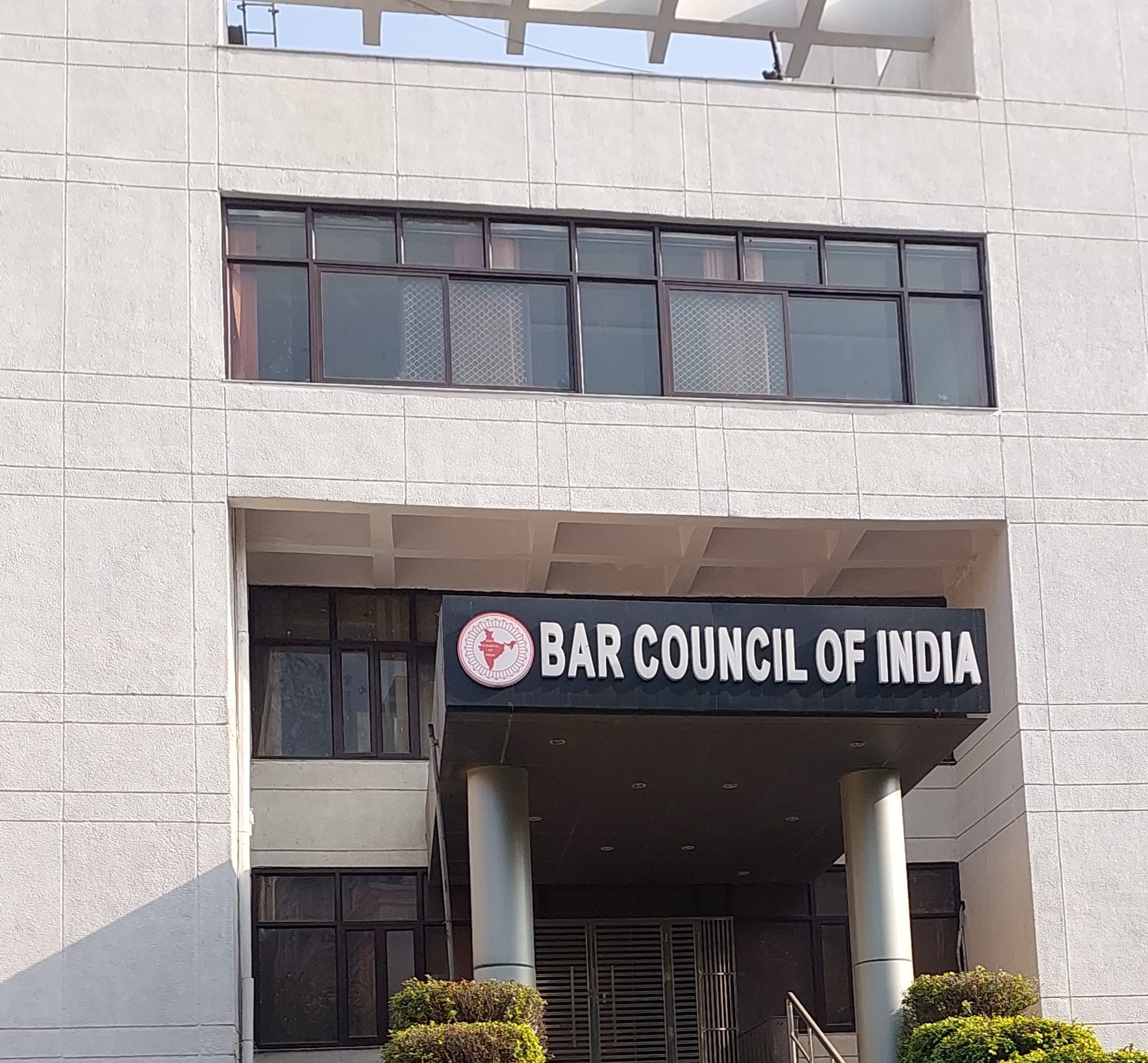 Section 7(1)(l) vests BCI with the power to perform all other functions conferred on it by or under this Act.

Section 7(1)(m) further vests BCI with the power to do all other things necessary for discharging the functions enumerated under Section 7 of the Act.

Section 10(2)(b) confers the power upon BCI to constitute a Legal Education Committee.

Sections 16 – 28 under Chapter III of the Advocates Act prescribe the admission and enrollment of Advocates and the power of the BCI and State Bar Councils to frame Rules in this regard.

The provisions of Sections 29, 30 and 33 of the Advocates Act do not confer an unfettered right on advocate to practice the profession of law. The entitlement under Section 29 and right granted under section 30 of the Act are subject to the provisions of the Act as well as the Rules framed thereunder.

Section 49 (ag) of the Act provides that the BCI may make rules for discharging its functions under this Act to prescribe the Class and Category of persons entitled to be enrolled as an Advocate.

Section 49 of the Act provides general power to the BCI to make rules for discharging its Functions under this Act.

Part IV of the BCI Rules provides for Rules on standards of legal education and recognition of degrees in law for the purpose of enrolment as advocate and inspection of Universities for recognizing its degree in law in consultation with Universities and State Bar Councils. The Legal Education Committee (LEC) is chaired by a former Judge of this Hon’ble Court and has 2 sitting Chief Justices of the High Courts, 5 noted academicians including 4 Vice Chancellors of National Law universities and premier Government Universities and eminent senior advocates apart from 5 members of the BCI.

Council of India vs. Bonnie FOI Law College & Ors.], the

Hon'ble Supreme Court had sought to address an issue of

recognition and accreditation of law colleges by the Bar

Hon'ble Supreme Court noted with concern the diminishing standards of professional legal education provided at various Law Colleges across the country, and, in particular, identified the quality and standard of infrastructure, library and faculty as core areas that need to be redressed, along with the pay and remuneration offered to the faculty members by Law Colleges. The order dated 29th June 2009 in this regard is as follows:-

The relevant portion of the Supreme Court's order reads as follows:

"The entire future of the legal profession depends on ultimate product of these Law Colleges. Looking to the gravity and seriousness of the matter, we request the learned Solicitor General and President of the Bar Association and the Chairman, Bar Council of India to look into the matter seriously and submit a report to this Court as expeditiously as possible. They would be at liberty to associate experts or any other person which they deem it appropriate."

The 3-Member Committee was, therefore, to examine issues concerning the manner of affiliation and recognition of Law Colleges by the Bar Council of India, identifying areas which require redressal, and also addressing factors impeding the implementation of the norms already in place. I state that the 3-Member Committee submitted a draft Report to the Hon'ble Supreme Court on 6th October 2009, wherein the Hon'ble Supreme Court was pleased to direct that the Report be placed before the Bar Council of India for consideration. The Report was, therefore, tabled before the Bar Council of India which, vide Resolution dated 24th October 2009, approved the Report unanimously subject to one amendment: it was the suggestion of the Bar Council that all law schools and colleges should be mandatorily required to establish legal aid clinics/centres to provide inexpensive and expeditious legal advice to the needy sections of our society. The said suggestion was incorporated by the 3-member Committee in its Report. I state that the Final Report of the 3-Member Committee on Reform of Legal Education was submitted to the Hon'ble Supreme Court on 10th November 2009 and was accepted by the Court. The Court was pleased to observe as follows:

"In our considered view, the recommendations given by the Committee would go a long way in improving the quality of legal education. We fully agree with the recommendations of the report Consequently, we direct the Central Government to take immediate steps to implement the final report submitted to this Court by the learned Solicitor General of India." I ‘state that the Hon'ble Supreme Court was, in particular, pleased to accept the recommendation of the 3-Member Committee with respect to the conduct of an All India Bar

"... The most significant achievement of this entire exercise has been the introduction of the Bar Examination. Learned Solicitor General submits that the first Bar Examination shall be conducted in July-August, 2010 by a specially constituted independent body, consisting of experts of various disciplines of national stature.

In the facts and circumstances of this case, we deem it appropriate to direct the Central Government to ensure that the entire programme framed by the three-member Committee is operationalized forthwith. We further direct the concerned institutions to fully cooperate with the Bar Council of India..."

Bar Council of India, in compliance with the directions passed by the Hon'ble Supreme Court, has framed the Bar Examination Rules under the provisions of Section 49(i) (ah) of the Advocates Act, 1961, which enable the Bar Council of India to frame rules prescribing the conditions subject to which an advocate shall have the right to practice and the circumstances under which a person shall be deemed to practice as an advocate in a court. The said Rules have been framed by the Bar Council after exhaustive deliberations with various stakeholders and consideration of representations made by numerous students currently pursuing a degree in law.

The All India Bar Examination were considered and approved by the Bar Council of India at its meeting held on 30th April 2010, wherein it was decided by the Council that the examination shall be mandatory for all law students graduating from the academic year 2009-2010 onwards, and that candidates may apply to appear in the examination only after enrolling as advocates under Section 24 of the Advocates Act, 1961.

That the Sole intention of the AIBE examination was to improve the standard of legal profession; therefore, AIBE examination is not relevant for those who are not interested to enter into the legal profession. Therefore, those candidates, who are not interested in practicing the law, cannot be exempted from obtaining enrolment before State Bar Council for appearing in the AIBE. The candidate will be awarded certificate of practice after clearing the examination and is eligible to practice in any court in India. The exam is conducted in 40 cities of India in national and regional languages.

All India Bar Examination is certification exam conducted twice a year by Bar Council of India for law graduates willing to start practice of profession as Lawyer. The exam is conducted in 50 cities having 140 centres as an open book exam. The exam is conducted to assess basic level knowledge of a member and lay down minimum benchmark for entering into practice of law in addition to assessing candidate's analytical skills. After clearing All India Bar Examination, the candidate is awarded certificate of practice by Bar Council of India. Qualified member in the exam can attend court hearings in any tribunals courts and administrative bodies. The exam is in multi-choice model and conducted offline in 3 and half hours duration. the All India Bar Examination is a post-enrolment examination where persons are initially said to be provisionally enrolled on an undertaking that they will pass the exam within 2 years of said enrolment. The concept of provisional enrolment and the undertaking was brought in through the BCI Resolution dated 12.04.2013 [Annexed herewith as Annexure – AN/1]. However, as a result of BCI Resolution dated 31.01.2017, it has been clarified that while the right to practice would only be for two years under a provisional enrolment, the said person can continue to take the Bar Examination as many times as is possible. The result therefore is that any person who is provisionally enrolled is allowed to practice for two years, but is allowed to take the exam not just for two years but for any number of times till he passes the exam while the date of reckoning seniority is from the date of the provisional enrolment.